All aboard Brittany Ferries’ Pont Aven for a French adventure 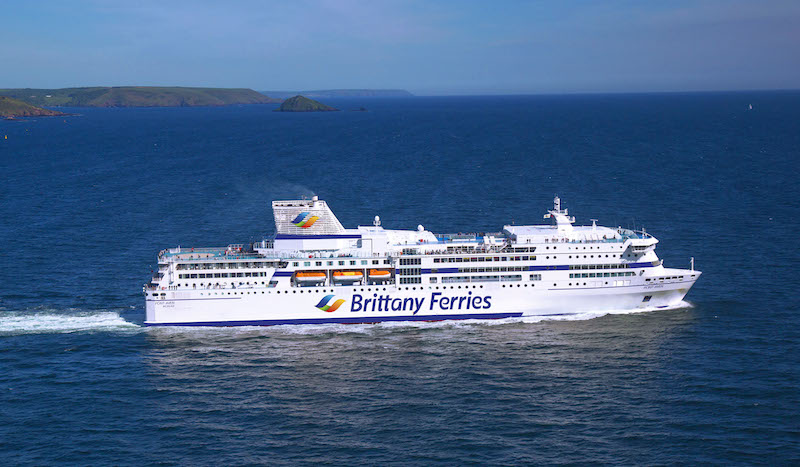 Thinking of flying on your next French business trip? Paul Fennessy explains why you should ditch the airports and jump on Brittany Ferries’ Pont Aven instead.

Back in October I had a piece of work crop up in Tours, France, for a few days. I’ve been fortunate enough to keep working throughout the pandemic, but it’s all been work in the UK.

Initially I was quite excited, not having been abroad for a year or so, it felt like a bit of a “light at the end of the tunnel” moment from the COVID misery. This quickly gave way to some trepidation about passing through a crowded airport and climbing into a cramped aluminum tube with lots of other people, when the virus was still in circulation.

A quick trawl of the airline websites brought further disappointment. Nothing from the south-west of England direct to Tours. The best bet was an enormous detour via Amsterdam or Dublin which took a whole day. A flight to Paris was an option but then I’d need a rental car at the other end and it was proving quite tedious joining the dots.

The added complication of taking quite a lot of equipment was starting to put the price up, too.

The dog needed a walk so I gave up on the puzzle and took him up to Jennycliff. That was where the lightbulb moment occurred, as Brittany Ferries flagship, MV Pont Aven, was steaming into Plymouth Sound in the afternoon sunshine. How could someone who specialises in Transport and Logistics be daft enough to have overlooked the solution on my doorstep?

My first family holiday as a child was to Douarnenez in Finisterre, camping out the back of my Dad’s rusty Allegro, and we travelled aboard Brittany Ferries first RORO car-ferry, the Penn-Ar-Bed, to Roscoff. Plymouth Ferryport has been the starting point for family road-trips, ski holidays and motorcycle adventures ever since.

Business trips however always seem to start from airports. Why is that?

Dog suitably exhausted and back at my work-from-home desk in my garage, I pondered this paradox further and headed to the Brittany Ferries website.

It was uncanny just how quickly my ducks formed an orderly row. I could leave home after dinner on the Tuesday, drive three miles to Millbay Docks, go to bed and wake up in my destination country. Café et croissant, then a straightforward morning’s drive, in my own car, would get me to my afternoon meeting in Tours comfortably.

Suddenly the problem of carting all the equipment along with me had disappeared too. Not quite able to believe my good fortune I booked it, smugly saving a fair bit of money on the drive-park-hotel-flight-flight-rentacar combo, too.

A colleague’s response was a baffled look and the comment, “Why don’t you fly there?” He was astonished when I explained the logic.

Next came the research into all the COVID protocols. This wasn’t as bad as it initially looked and certainly no more complicated than flying. The Brittany Ferries website linked me through to the forms that the French Government wanted filled out and I was already suitably jabbed up.

France has been making use of QR code COVID passes for entry to hotels and restaurants and everyone seemed quite content with the one in the UK’s NHS App.

On the day, I drove to Millbay docks ridiculously early. I was expecting long queues leading to a painstaking examination of my documents, which I had diligently completed and laid out on the dashboard in readiness.

My eagerness proved quite unnecessary, the port operations were slick and it was over in 30 seconds at the Brittany Ferries check-in kiosk. No more friction than pre-pandemic apart from an extra five seconds to scan my “Pass Sanitaire” QR code.

This put me at the front of the queue and early boarding put me right behind the bow doors, in pole position for my drive to Tours the following morning. I was quite surprised how many vehicles followed me aboard, but once I’d made my way up from the car decks to the passenger areas, the ship certainly didn’t feel crowded.

I had a wander around on the outside decks but the weather drove me back inside and I headed to the bar for a quick pint before bed. Even before the ship had cast off, the resident singer had taken the stage in the Grand Pavois bar where there was plentiful space for even the most cautious social-distancer. You can’t sit on the quarterdeck in the fresh air and watch dolphins on a Boeing 737, and if you like a bit of elbow-room, this is the way to travel.

The weather forecast was pretty grim for the overnight crossing, but Pont Aven is a big ship, built to work the Bay of Biscay, not like some of the flat-bottomed barges you’ll find shuttling across the Straits of Dover. She took the weather in her stride and I slept like a baby.

The biggest advantage of making this trip with Brittany Ferries for me was time. Quite ironic when the alternative can theoretically go 400mph faster. If I’d flown, though, I’d have needed a night in an airport hotel before an early morning flight. On the ferry, I could do two things at once – travel and sleep simultaneously. Not a minute wasted!

I got everything done that I needed to in France and with time to spare. After three days of meetings conducted in French, my brain was sautéed so to decompress, I took the scenic route back to Roscoff along the banks of the Loire via Nantes and made sure I had my post-brexit duty-free allowance of 24 bottles of wine tucked safely away in the boot.

Back aboard at Roscoff, I connected to the ship’s Wi-Fi and got the report from the trip written up, before heading up on deck for a walk around, in decidedly better weather than the outbound journey.

Sitting in the sun, passing the Eddystone on the way home I couldn’t help but be thankful for how easy and efficient this trip had been compared to the faff of the alternatives. It’s certainly changed the way I’ll look at travelling to continental Europe for work.

Brittany Ferries have remained steadfastly committed to the link between Plymouth and Europe through both Brexit and COVID. As they approach their 50th anniversary, they have invested heavily in two brand new cruise-ferry ships – the Galicia and the Salamanca – both of which have now been delivered and are being commissioned for the 2022 season.

These two ships are environmentally state of the art, being fuelled by Liquefied Natural Gas instead of Diesel. This allows for a much cleaner burn then Diesel and massive reductions in Sulphur Dioxide, Nitrogen Dioxide, particulates and also a 25% saving in CO2.

Galicia and Salamanca also employ hybrid technology similar to hybrid cars, storing up electric power while the main engines are running at sea to keep essential systems running whilst in port. This negates the need to run the engines whilst in harbour, saving even more emissions and improving air quality, which has to be good for Plymouth.

I’m now fortunate to be looking forward to my first holiday since 2019. Chamber CEO Stuart Elford and I are off for another adventure on our motorbikes at the end of March. How are we getting there? Brittany Ferries, of course!