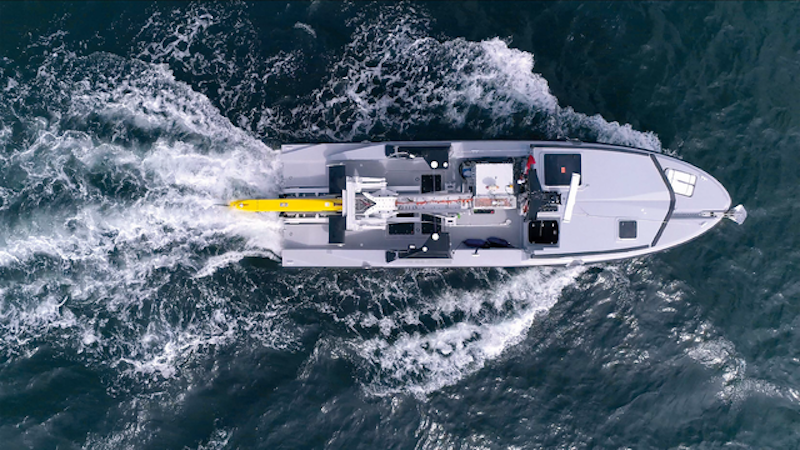 Thales Group has been announced as an official Patron of the Devon & Plymouth Chamber of Commerce.

A global technology leader, Thales in the UK is committed to being at the forefront of the next great revolution in naval technology – Maritime Autonomy.

The firm ensures that its products and services continue to deliver operational advantage to customers in line with their requirements and aims to ensure that servicemen, women and platforms remain safe from existing and emerging threats.

David Evans is Thales’ Policy Director for the Underwater Systems Bid, which is particularly prominent here in the South West.

Continuing Turnchapel Wharf’s long history with the Royal Navy, the Royal Marines and Industry, Thales has created a UK Centre of Autonomy for the development, assessment, and certification of autonomous systems at its new waterfront facility in Plymouth.

Turnchapel Wharf is changing the way autonomous capability is developed by enabling rapid exploration and exploitation of emergent and disruptive technologies.

This new Centre offers a secure location to conduct a full evaluation cycle for multi-domain platforms, with facilities including meeting rooms, office space and network services with adjacent water side facilities including secure, fully-equipped workshops and storage, platform mooring for multiple craft – including Thales’s autonomous capability development platform and rapid access to the water via a slipway.

“We selected Turnchapel Wharf because it was the perfect site for our UK Centre for Autonomy. Autonomy is a growing area not only within our business but also in the Defence industry, offshore energy, straight-forward shipping and all sorts of other industries.”

A former Royal Marine himself, David added: “We’re very close to the Royal Navy, whom we’ve supported for more than 100 years with periscopes and other technologies, and the relationship with them is very important.

“It’s back to the future in some ways; the military is leading the way with autonomy – whether it’s land vehicles or maritime craft, almost all of the development work has been done through the military.

“The work going on in Turnchapel Wharf was initiated by military requirement, but it is being quickly followed up on by the offshore energy world and all sorts of other people who want the technology which we’re developing and testing in the South West.”

Thales was also closely involved with the Mayflower Autonomous Ship (MAS), a ground-breaking vessel which is aiming to reflect the historic transatlantic voyage of 1620.

The ship was officially launched at a naming ceremony in Plymouth on September 16, 2020 – 400 years after the original Mayflower left the maritime city to cross to America.

However, truly following in the footsteps of her namesake, the MAS unfortunately had to cut short its maiden voyage just days after leaving Plymouth in June 2021.

She eventually returned to the water in September, with the primary teams behind the project – Promare and IBM – planning another crossing at a later date.

David explained: “The MSubs team (also based in Plymouth) who put it all together used some of our capabilities to support the vessel in terms of real estate at Turnchapel and also the technology.

“That’s really what Thales’ dominant purpose is. It’s not just a defence company, it’s defence and beyond. Defence is obviously what we major in here in the South West, but technology is where we’re growing most and where we’ve delivered some of our most effective products historically.”

With more than 80,000 employees on five continents, Thales knows what it takes to succeed on a global scale. And David says the experienced team is keen to share its knowledge and expertise with Chamber members.

“We’ve already worked with some members of the Chamber,” he revealed. “There is an emerging ecosystem for autonomy based around Turnchapel, which offers a focal point for autonomy.

“It’s not the only place this is being done, but it is the most prominent of all the sites and we’ve got a lot that we can offer people in terms of supporting their own trials and advising and helping on how they might do things in the future.

“For the rest of those involved in the journey, Thales has got plenty to give. Being a technology-driven company, some of the expertise we have – these are quite rare qualities in this area, partly because it’s new and partly because it is quite specialist and niche.

“I think Chamber members will be delighted to come and see what we’ve done and compare and contrast. Equally, I think quite a lot of members have already approached us and asked us, ‘Can you help us with this?’, or ‘Can you do this?’.

“It’s partly to do with the 5G network that runs around Plymouth Sound, Smart Sound, and we’re a link in that which is enormously valuable to lots of people.”

Thales is working hard to become a trusted partner for small- and medium-sized enterprises (SME) and academia, unlocking the potential of maritime autonomy and creating opportunities for everybody in a nascent sector.

It has long-standing connections with a number of key organisations, including Plymouth City Council, Bristol University, the South Coast Marine Cluster, The National Oceanography Centre (NOC) and the University of Plymouth’s Marine Institute, sharing knowledge and expertise for mutual benefit.

David said: “By becoming a Patron of the Devon & Plymouth Chamber, it was a recognition that there was an opportunity for us to help people and to benefit from others – both from their interest and their work.

“We’re currently collaborating with lots of people in terms of research and development, which is not only interesting but is also good work.

“A lot of the work we’re doing in Turnchapel is part of the Lancaster House Agreement, which is an Anglo-French project, so we collaborate very, very closely with the team over in Brest.

“It’s a great example of Anglo-French cooperation, and it helps to keep Brittany Ferries in business!”

Thales’ position as a Patron of the Devon & Plymouth Chamber reflects its status as a global and regional leader, and as a supporter of businesses in the South West and beyond.

Patrons of the Chamber are some of the best-known and respected names in the business community. They are woven into the Chamber’s extensive lobbying activities and become one of our region’s principal voices.

“The sheer breadth of the firm’s knowledge and their position as Patron underlines just what an asset they are and will continue to be to our members.

“Our Patrons play a unique role in developing the future of our region and the Chamber is far stronger with Thales’ support and Patronage.”