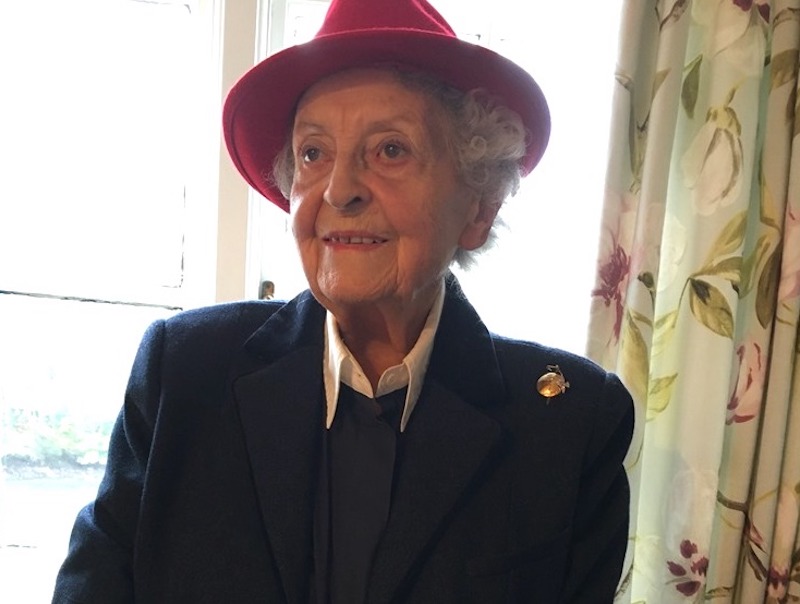 As well as highlighting the social, economic, cultural and political achievements of women, this global day also marks a call to action for accelerating gender parity.

And there are few in the South West – men or women – who have inspired more people than Dr Suzanne Sparrow.

Born and bred in Plymouth, Suzanne joined the Royal Navy at the age of 17. She even survived her home being blitzed in 1941.

After being released from service at the end of World War II, she worked in various jobs – including being secretary at the Marine Research Laboratory at Newton Ferrers.

During her time there, she met many visitors from overseas, some of whom had limited spoken English.

She says: “At home we also had young overseas students staying with the family to help improve their English, and it was through this I realised that Plymouth did not have a professional language school.”

In 1978, Suzanne founded the Suzanne Sparrow Plymouth Language School, which this year celebrates its 42nd year.

“We’ve taught some really extraordinary people over the years,” she says.

“We get some very nice calls from people overseas telling us how much they’ve enjoyed being at our school and how much we’ve helped them.

“I had one lovely call the other day from a lady who lives in Paris and said she’d just found some photographs of the school.

“She came to us in 1997/98 with her young daughter, and the daughter is now one of the diplomats in Brussels.

Now aged 96, Suzanne has handed much of the day-to-day running of the North Road-based business to her daughter, Hilary – who is now principal – but she remains very much involved.

Suzanne admits the past 12 months have been among the toughest she can remember.

She says: “Language schools have been very badly affected by aftermath of the Covid-19 pandemic and the Brexit situation.

“Like all other schools we’ve had to close the building, but we’ve been grinding our way through this difficult situation and we’re opening again on Monday (March 8).

“Now we’re in our 42nd year and throughout I’ve maintained my office here at home, so that’s been a huge benefit because we’ve been able to send messages and emails throughout lockdown.

“So, we have continued the school online, which has brought an enormous transformation in our methods of teaching – and it seems to work.

“It’s obviously been very difficult as we’ve been employing people who we’ve now had to let go, but it will improve and we’ll keep going.

Suzanne admits people’s attitudes to women in business have greatly changed over the years for the better.

She reveals: “When I started, I was very badly treated – like a second-class citizen.

“When I became chairman of the Plymouth Chamber of Commerce (Suzanne is still only the second woman to hold that position), there was definitely an attitude of, ‘Oh dear, what’s going to happen now?’.

“But we were the pioneers of language schools in Plymouth, and we were ten years ahead of everybody else.”

In 1989, Suzanne opened up the Chamber to an international section which she ran for more than a decade.

She explains: “We chaired meetings for businesspeople who were working with businesses abroad. We also linked up with Plymouth City Council so that when overseas delegations or individuals came to the UK, we were there to greet and entertain them.

“We also had a group of people from our local Chamber visit Brussels and Strasbourg.

“It was pretty early days back then, but Audrey Cook booked all our coaches and hotels – it was that I believe had never been done before.”

In 2016, Suzanne won the 2016 Lifetime Achievement honour at the Plymouth Business Awards, given to the businessman or woman who have made a considerable, profitable and lasting contribution to business in the city.

Suzanne says: “I have certainly learned a lot over the years, and I have made a lot of very good friends – particularly from overseas.

“What surprises me most is how underestimated our English language is. How would Boris Johnson have got on with Brexit if the others didn’t speak English?

“For a number of years, we ran the Words and Music Festival with the University of Plymouth to try and stimulate interest – particularly for schools teaching English and to encourage people to listen to the music of the language.

“Our focus is on educating people who come to the UK to live and work, and language schools like ours contribute greatly to the English language being used abroad and in this country.”