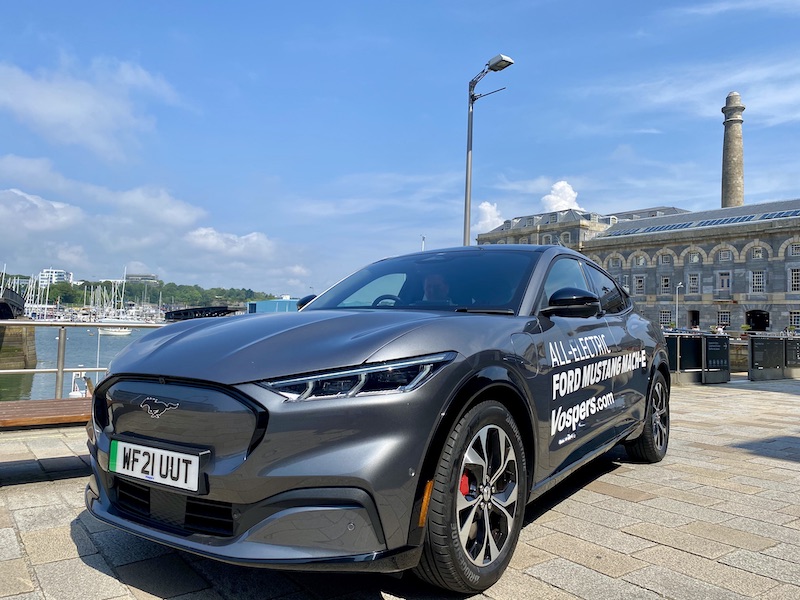 Anyone who knows me knows I love a challenge. So, when the salesman at Vospers handed me the keys to the Ford Mustang Mach-E and said, “You won’t find much wrong with it”, I took it as a challenge and spent a very enjoyable day failing in my mission.

‘Mission’ is a good word, because everything about this car reminded me of a fighter jet; from the bulge in the bonnet to the speedometer that indicated my ‘ground speed’.

The door opened with one touch of my finger and I slid into the cockpit which, with its huge Tesla-like central control screen, is a very high-tech place to be.

As long as you have your keys with you, everything is touch-operated – although if you lose them, you can gain entry with a PIN which can also be used for the valet mode.

It is comfortable and classy, too; I was wafted by beautifully cool and crisp air from the climate control and the new car smell was delightful.

In fact, the whole interior is very pleasant and well thought-out. There is storage and connectivity wherever you need it, from the sunglasses pocket above the mirror to the wireless charging mat that is cleverly shaped to hold your phone as you pilot your personal electric rocket.

The 12 Volt and USB adaptors are in the right places, and cup holders and bucket storage are where you need them, too. The interior is light and bright thanks to the massive panoramic glass roof that further reminded me of the canopy on a fighter plane.

The Mach-E is not shaped like the traditional Mustang, but you can see its pedigree from the Mustang-like tail lights and galloping horse on the bonnet (under which is a front boot that has a waterproof storage bucket you can fill with ice to cool your drinks apparently!).

While it is much more family friendly than its namesake and will happily accommodate a family of four, it has presence but is not too big and certainly not difficult to manoeuvre in tight spaces thanks to the myriad of sensors and cameras that show you the car from every possible angle.

It has Park Pilot and Active Park Assist, too, so you would have to be pretty poor at parking not to be able to get this into a space not much bigger than the car. A large level boot and plenty of space in the back make the Mustang practical but definitely not boring.

What you really want to know, obviously, is how did it drive? Well, it drives however you want it to thanks to the three drive modes. You can pull gently away in the standard ‘Whisper’ setting, turn up the volume by selecting ‘Active’ or, very appropriately for a Mustang, you can go the whole hog and switch to ‘Untamed’ which releases the inner hooligan in you.

I’ll admit I selected this mode quite a few times! You can even choose to hear the growl of an imaginary engine if you aren’t happy with the whistling of the motors which, under acceleration, are like a distant jet engine spooling up.

With 0-60 mph coming in less than five seconds, you will feel like it’s powered by a jet engine, too, and you can certainly feel the G-Force as you throw it effortlessly through the turns.

You can get the back to start to step out with a twist of the steering wheel and gentle squeal from the tyres, but it never once feels like it is going to give way – possibly helped by the fact I was driving the four-wheel drive model.

The car I tested also had the extended-range option, which Ford claims gives 379 miles and I have no reason to doubt it. This makes the Mustang Mach-E one of the fastest, most efficient and longest-range all-electric cars available, and at a very reasonable price compared to the competition.

The Mach-E is very easy to drive and with the Sat Nav and all the driver assistance modes switched on – including traction control, auto hold, lane follow, and adaptive radar cruise control – it feels like you could get in the back seat and have a cup of tea (please don’t try this or sue me if you are silly enough to take that literally)! Actually, Ford says the car is ready for fully autonomous driving.

But why would you want to when the Mustang is so fun and engaging to drive? Despite the ease and comfort, you can feel the road and sense the handling very well which, combined with the blistering acceleration, makes it a joy to drive.

So much so, in fact, that I took the long way home across the moors for the sheer enjoyment of driving it. A few Dartmoor ponies looked on and I think they sensed the pedigree of this thoroughbred (the car not me!) as I passed.

All in all, the Mustang Mach-E is a pretty impressive motor, with practicality and presence combined. When I parked up to return the car, the seat slid back to let me out but I didn’t really want to leave it.

I gave the horse on the bonnet a pat and handed the reins back to the very kind people at Vospers, grudgingly admitting that I had failed to find much wrong with this quietly untamed beast.